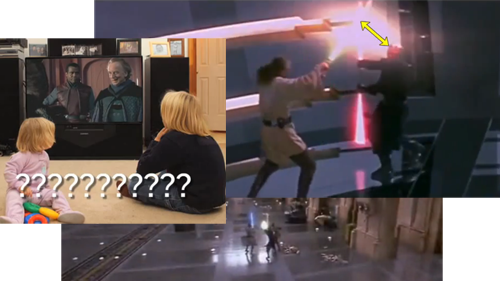 "Fan" is short for fanatic, and while their support is usually welcomed by those involved in creative work, they can bring that same energy to bear when they are disappointed.

In 1999 George Lucas released the first of his long-anticipated prequels to the original Star Wars trilogy, The Phantom Menace (TPM.) While it was commercially successful—it took in $43,300,000 at the box office—it was not well received by many long-time fans.

Earlier this week, our own kelloggs2066 sent me What if... Henry Mancini did the music for Star Wars?, a wry critique of the final light saber fight from TPM. As creator EddyDBravo put it, "Some of us have been calling it "male dance" for years now. I just added the "appropriate" music."

If you think TPM is improved by this musical choice, check out his channel for a couple of other Mancini/Menace mashups.

What if... reminded me of The (Totally) Phantom Menace, which does a better job of explaining why fans have been calling it "male dance" in the first place.

Now, one could make the argument that it's really pointing out how stage combat—especially between principal actors—is done. That's true as far as it goes, but in a film we shouldn't be able to see that. There are ways of chosing your filming angles (or adjusting your choreography) to hide most of this. So what happened?

Nobody has critiqued the prequels as thoroughly as Mike Stoklasa, an independent film maker from Milwaukee. A few years back he posted a seventy minute critique of TPM, later going on to cover the rest of the trilogy. His basic, not terribly controversial, thesis is that Lucas was able to surround himself with yes-men, but he goes into great detail to show how that manifested itself in the films. Part One is below, and you can find the rest on his website. It's mostly told by the character of "Harry S. Plinkett," a foul-mouthed serial killer, so if you're at work or the kids are in the room, just watch this section to get a taste of it. I recommend the entire thing, though.

On a related note, Michael Kaminski deconstructed the myth that Lucas had a master plan for his Star Wars films from the start in an epic book-length web post. Unfortunately, that web site is currently infected with trojans and browser exploits (google "Secret History of Star Wars" if you want to risk it.) Fortunately, he managed to get it published, so you can pick up a copy at Amazon. Curiously, there's no Kindle edition yet.

Have a fan film or web series you'd like to see featured? Hit up Church at church@republibot.com.