The Hunger Games is raking in big bucks at the box office, but the fans are way ahead of Hollywood. Let's take a look at some films based on the other books in the trilogy. (Spoilers ahead, natch.) 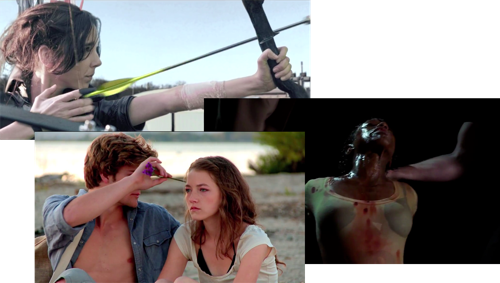 The Mockingbird Propo has gotten a lot of attention lately. It takes the form of a "propo," or propoganda spot, that was filmed in the third book, Mockingbird.

It's very faithful to the book's description, although I think propoganda
would have been edited more tightly. The actress was an unfortunate choice, and the effects are uneven, but the costumes are terrific. They got details right that were only mentioned in passing in the books, like Kat's hood.

Moviefone has a brief interview with the producer.

Johana Mason is a supporting character who is introduced in the second book, Catching Fire. This eponymous fan film is a portrait of the character.

It cleverly wraps an event of the third book around some other incidents that are only alluded to in the series. Fortunately, they had a capable group of actors. The production is quite good, and it gets a lot out of minimal sets. The only real weak point is the fight scene, which had that staged quality that seems to plague fan films.

Finn and Annie is an six episode web series (here collected into a 22 minute video) that is based on a pair of characters from the latter two books. The characters have a history together, and the series imagines a detailed backstory for them, weaving in some apparently unrelated details (like Finn's thing for knots.)

This is very polished. You can even buy the soundtrack. They managed to get a bunch of decent-to-good actors—six of them to play two characters! They are also very clever about their use of sets. By sticking to just the two they anchor the characters even as the actors playing them change.

I wouldn't be surprised to find that this group, Mainstay Productions, has some pros in their ranks. Unfortunately their site is currently down, but they've done a couple other (quite good) Hunger Games fan films which you can find gathered here.

That's just a few of the fan films for this franchise. There are many more, so I'll likely be revisiting this subject again.