Rainbow Dash is upstaged by a mysterious masked pony. Let's see how she handles it. 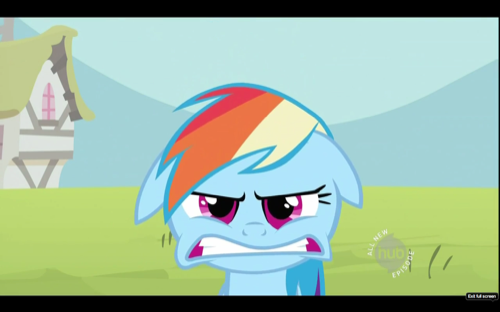 Recap: Scootaloo is presiding over a meeting of the Rainbow Dash Fan Club. They begin arguing over the proper superlative to apply to Dash. Suggestions from "Awesome" to "Bedazzling" are proposed. A familiar voice suggests "SuperUltraExtremeAwesomazzing" and the motion carries. We pull back to a view outside the clubhouse window to reveal Dash laughing to herself.

Later, Dash is relaxing in a cloud when she hears cries for help. She rushes down and finds a young filly trapped in a well. Dash flies down and retrieves her, which earns her a round of cheers from a newly gathered crowd. Dash says it was no big deal, but the filly calls her her hero and the crowd cheers again. Dash just blushes at the attention.

A couple more disasters strike Ponyville and Dash saves a baby in a runaway carriage and a group of elder ponies on a collapsing balcony. Each time she becomes a bigger ham and plays herself up to the crowd. The rest of the Mane Six are not amused by the increasingly overconfident Dash.

During an autograph signing a balloon carrying an earth pony ruptures and plummets to the ground. Dash signs a few more autographs, figuring she's got time, but a mysterious pony in costume arrives and saves the pilot instead. Mayor Mare declares the masked hero "The Mysterious Mare Do Well" and the crowd cheers, but the silent pony canters over the horizon. Dash is miffed.

The spate of disasters continue, and Dash finds herself outperformed by Mare Do Well each time. The mysterious pony is able to stop a runaway coach that's too much for Dash, and navigate easily a rain of falling debris to rescue construction workers. She proves to be a unicorn when she fixes a dam that Dash inadvertently unleashed when she literally patted herself on the back instead of plugging the hole. Shortly afterwards she proves that she can match Dash in flying, as she also has wings.

Back at Sugarcube Corner, the rest of the Mane Six are singing Mare Do Well's praises. Frustrated, Dash sets out to prove that she's the better hero. The spate of disasters has ended, however. She helps Granny Smith cross the street but is brained for her efforts by Granny, who didn't want to cross in the first place. She manages to open a jar of peanut butter for a unicorn, who is unimpressed. She spots a lawnmower and 'saves' a lawn (from weeds.) Finally she admits that those feats are nothing to brag about.

While sulking on a stormcloud, Dash is informed by Scootaloo that there's a Thank You Parade for Mare Do Well. Dash at first scoffs at the idea of attending, but then changes her mind. When Mare Do Well arrives, Dash attempts to unmask her. Mare Do Well runs off and Dash chases her through Ponyville. The costumed pony proves difficult to catch due to her ability to make impossible dodges, running into one alley and out another. Dash eventually manages to tackle her and strips off her mask, revealing... Pinkie Pie?! Another version of Mare Do Well appears and reveals herself to be Twilight. A third steps out and unmasks as Applejack. They all stood in for Mare Do Well, with Fluttershy helping out for the fly-by and Rarity making all the costumes. They explain that they did it because of her bragging, apparently setting a better example. Dash is abashed, and takes pen to paper for a letter to Celestia. For what I believe is the first time, we don't actually hear the letter that's composed, although that would be redundant at this point. 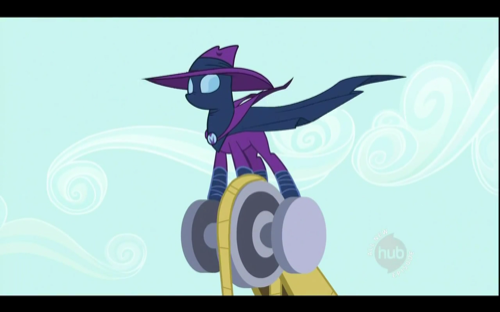 Review: Well, this one felt... odd. This might be because the writer, Meriweather Williams, while a veteran of animated shows, is new to the MLP team.

On the one hand, I was honestly surprised by the outcome. I had thought that Mare Do Well was going to turn out to be a character that was setting up the disasters so she could appear heroic. While it became apparent that there was more than one MDW (only the princesses have horns and wings) I missed the give-away color of her magic when she repaired the dam, probably because it matched her costume. So, that was well done.

On the other hand, the whole situation felt weird. The other ponies were conspiring behind their friend's back to set up a composite character that could outshine her. The lesson is a fine one, but its somewhat undercut by the praise that the Mane Six give themselves. Twilight praises MDW's studiousness, Rarity her fashion, etc. They also never confront Dash directly until they're unmasked. I think we at least needed a scene where they warn her she's becoming a little head-swollen before they go through with the elaborate charade.

The Mare Do Well character was pretty impressive. It appears to borrow from both Batman and Darkwing Duck. The hat and color scheme are Darkwing's, possibly with a bit of the Phantom thrown in, while the cape and background music are borrowed from Batman: The Animated Series. Note also the Batman-style posters in the town after she makes her appearance.

I did like that they lampshaded the cartoon trope of the road off of a cliff, with two near-disastrous accidents and a third failing to appear when Dash was looking for it.

While the technology has always been somewhat schizophrenic in this show, it really seemed to take a leap forward this episode. We've now got steam shovels and a hydroelectric dam (apparently to charge those modern flash cameras that also showed up.)

As always, there's a lot of nice touches that reward a rewatch. Two of the elder ponies from the balcony can be seen riding with Derpy in the train in the new opening sequence. The Rainbow Dash Fan Club has a Nyan Cat style poster of Dash. 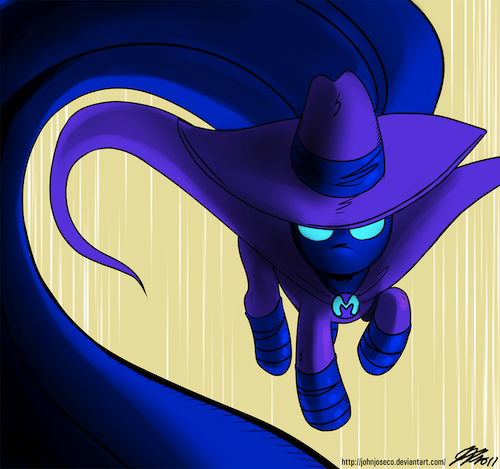 Brony Notes: Derpy is again in blink-and-you-miss-it mode, appearing briefly in crowd shots starting at about four and a half minutes in.

I'm not the only one who felt this episode was a bit off. There's been a general back and forth in the community about it, although there's no real consensus. Mare Do Well herself was well received, with fan art appearing within hours of the show, such as the above image by the prolific deviantArtist johnjoseco.

One of the figures in the balloon on this year's Comic Con poster finally makes her appearance, rather dramatically. There was a lot of speculation about this character because she was hard to make out. I have to admit I liked the "Al Capony" gangster that some people saw.

The creativity of the fandom continues to impress me. Aside from the fiction, art, and music, there are many games in development right now. One of them, a computer role playing game called Equestria Tales, just released a video of their work in progress, which you can see below. It's got a wonderful dream-like quality to it.

Church also reviews fan films for Republibot. You can reach him at church@republibot.com