Somepony (well, donkey) is not interested in being Pinkie Pie's friend? She's not going to take that well. 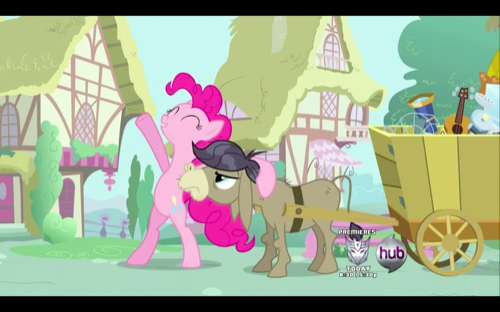 Afterwards, she strolls through town greeting everypony (and cow and donkey,) and displaying a prodigious memory, especially when it comes to birthdays. She's delighted to encounter a newcomer to Ponyville. However, Cranky Doodle Donkey is less than delighted to meet her. Stunned at this unprecedented turn of events, Pinkie resolves to win him over as a friend.

She dogs Cranky through town, trying to engage him. He tells her he's made enough friends in his life and he doesn't need any more. When she starts going through the stuff in his cart, he snaps at her. Pinkie remembers she has a wagon of her own, and brings out a literal Welcome Wagon.

Unfortunately, Pinkie has put the confetti in the oven and the cake mix in the confetti cannons. The resulting mess causes Cranky to lose his toupee. Pinkie finds it, but mistakes it for a spider and stomps it apart. Realizing her mistake, she tries to fix it by alerting the entire town to the fact in an attempt to find a new one. Cranky storms off, and Pinkie senses she's losing him.

She diverts Cranky to the spa and then gets a new toupee from Rarity. Cranky is impressed, but not enough to smile. Thinking she's made some progress, Pinkie follows him to his new, somewhat dilapadated, place.

Looking through his stuff again, she gets him to accidentally disclose that he'd been searching Equestria for a "special" friend, but he's given up and just wants to settle down. She finds a scrapbook, but when she turns to ask him about it a Rube Goldberg accident results in a lamp setting the book on fire. Dousing it with water only makes it burnt and soggy. Cranky kicks her out, vowing to never, ever, ever, ever, ever be her friend.

Pinkie consults with Twilight, who tells her that she's just going to have to accept the fact that Cranky is going to be an exception. Rainbow Dash adds that he doesn't want to be bothered by her over-the-top super-hyper antics. Pinkie concedes this, and decides that she'll leave Cranky alone... after he accepts her apology!

Pinkie chases Cranky over hill and dale trying to get him to accept her apology, which he refuses. Finally, cornered in his own house, he tells her that she destroyed all he had to remember "her" by, and there's nothing she can do to make it up. Pinkie thinks for a second and then dashes off, returning shortly with the donkey Matilda, Cranky's lost love. Pinkie explains that she remembered seeing some momentoes in her scrapbook that were similar to the ones in Cranky's. Cranky is delighted at this turn of events, to the point of smiling, but declines Pinkie's offer of a party in favor of spending some time catching up with Matilda. Pinkie leaves them while mentally composing her letter to Celestia, noting that not all friends like to run and laugh and play together. 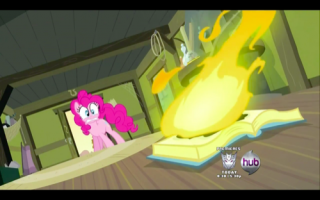 Review: Wow. Four new songs in one episode. Even for a Pinkie episode, that's got to be a record.

I enjoyed this one. Cranky was an instantly relateable character. His dry sense of humor works really well against Pinkie's cheerful (apparent) obliviousness. He also provided a very "adult" perspective, with a resigned sense of world-weariness, cherished memories, and eventually a rekindled romance. (Was that the first actual kiss we've seen between characters?)

Pinkie, by contrast, was even more child-like than usual. Her untamed curiousity and hyperactivity really stood out here. She really has her sense of self-worth tied to the idea of being friends with everyone, as Twilight alludes to. It's a bit sad, if you think about it, since her self-esteem is dependent on others.

It seems that this season we're getting more nuanced lessons. Instead of the generic "face up to your fears" and the like, we've got "not everyone wants to play all the time and some adults don't appreciate your hyper antics." You really get the sense that the writers know actual children, which is often missing from fare aimed at them.

I have to admit that I wasn't impressed with the "Smile" song the first time I heard it. It quickly grew on me, though, and now I think it's among the best of Daniel Ingram's work for the show. Likewise, William Anderson (who does the background intrumental music) did another outstanding job. The music for Pinkie's and Cranky's first meeting is worth paying attention to.

The animators must have had a ball this episode. Pinkie is always good for some crazy antics, and she put the pedal through the floor this time around. The standout, though, was the "inside Pinkie's head" stop motion animated sequence with felt cutouts. It was an inspired bit of innovative storytelling that would do credit to any animated work. I'm not sure who's idea it was, but the sequence was done at home by director Jayson Thiessen and his wife (a Studio 9 storyboard artist.)

In an interesting bit of world-building, Mayor Mare appears between two other official looking ponies. One has an open scroll as a cutie mark and one has a judge's gavel. We can infer that these are representatives of the legislative and judicial branches of Ponyville's government.

There's quite a bit of continuity going on this episode: Pinkie takes care of the Cake twins. Dash is still reading Daring Do books, and the toupee that Rarity produced looks a lot like the hair of the "fabulous" sea monster she helped last season. The show wasn't supposed to have much continuity, so it's nice to see it show up.

Finally, in potentially the most disturbing image of the series, the snowglobe Pinkie finds looks a lot like the infamous snowglobe at the end of St. Elsewhere. 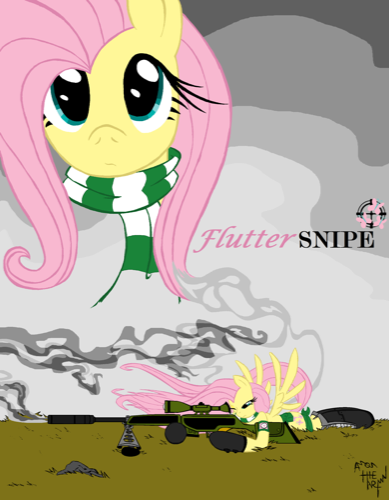 Brony Notes: Derpy was front and center, but still easy to miss. She's in the snowglobe that Pinkie finds.

This episode was generally well received by fans. However, there are some who were disturbed by Pinkie's refusal to take no for an answer, and her general intrusiveness.

To my surprise, Cranky doesn't appear to be a hit with the artists. Fan artists are capricious as Pinkie Pie, and what catches their fancy is wildly unpredictable. Last year it was ponies in socks. Lately there's been a few images of Fluttershy as a sniper, such as the above by deviantArtist AmostheArtman. I don't get it (well, I guess she'd be good at it) but we'll see if it takes off.

The "Smile" song is definitely a hit. It was actually leaked a few months back, but most musicians treated it as a spoiler and only released their takes after it officially aired. Below is YouTube's DrDissonance1's Steampunk(!) version.

As of March 3rd the Hub will move Friendship is Magic from its current morning slot to 1:00 in the afternoon (Eastern Time.) Since a large part of the adult fandom is in college, this news was met with great rejoicing.

Until they found out that there wasn't going to be a new episode next week.