Twilight and her friends are tasked by Celestia with mounting the wedding of the year!

Recap: The Mane Six are having a picnic when Spike runs up to them. Out of breath, he collapses in front of Twilight and belches out a letter. She and her friends have been tasked by Celestia to provide preparations for the wedding. Twilight's confused, since it doesn't mention what wedding. Spike then hands her the letter he was trying to deliver in the first place. It's an invitation to the wedding of Princess Mi Amore Cadenza and... Twilight's brother, Shining Armor.

Twilight is annoyed that somepony she's never heard of is marrying her brother (whom we never heard of) and she first hears about it via the invitation. In the first song of the finale, she exposits that her brother was her BBBFF (Big Brother Best Friend Forever) when she was a young filly in Canterlot. They travel up to Canterlot, which is now protected by a giant forcefield and an increased number of guards. Twilight confronts her brother, who is captain of the guards, about not telling her about the wedding in person. He explains that there's an unspecified threat against the kingdom and he is the one maintaining the forcefield. He asks her to be his 'best mare.' She accepts but demands to know who "Princess Mi Amore Cadenza" is. He tells her that she's her old foal-sitter, whom she knew as Cadence. Twilight is overjoyed, since she remembers Cadence fondly, but "Princess Mi Amore Cadenza" doesn't appear to remember her at all.

Worse, Cadenza appears to have turned into Bridezilla, dismissing the work that Twilight's friends are putting int the preparations. Twilight starts to doubt that she's worthy of her brother, although her friends chalk it up to nerves. When she sees Cadenza using magic to cure her brother's 'headache' she becomes convinced that she's actually evil. She turns to her friends, only to find them fussing about with dresses. Cadenza has asked them to be her new bridesmaids, although 'she didn't say' what happened to the old ones.

Feeling alone, Twilight confronts Cadenza during the wedding rehersal. Cadenza runs off in tears. Twilight's brother dresses her down, explaining that the spell she cast was to help with his migraines, and the old bridesmaids were dismissed for being gold-diggers. Everyone storms off, leaving Twilight despondent. She gives a sad reprise of her song about her brother and Cadenza returns. Twilight tearfully tells her that she's sorry, and Cadenza tells her that she "will be." Twilight is surrounded by a magic circle that sinks her beneath the floor.

We find Twilight in a network of caves beneath Canterlot, a nearly forgotten relic of its early days. Cadenza appears in the facets of gems encrusted in the walls and tells her that there she'll be unable to interfere with her plans for her brother. Enraged, Twilight tries zapping her image but is frustrated by the "house of mirrors" effect of the caves until she breaks through a wall to reveal Cadenza sitting on the other side. Twilight tackles her, but she convinces her that she's been a prisoner too, and the Cadenza in Canterlot is an impostor. Together, they set off to find their way out.

We get a broadway-style song between the fake and real Cadenza, revealing their different takes on the wedding day, before Twilight and Cadence find their way out. Twilight interrupts the wedding ceremony, to everyone's annoyance, but then Cadence arrives and accuses the fake princess of being a Changeling. She drops her disguise and reveals herself to be the Queen of the Changelings, beings of improbable anatomy who feed on love. Her minions are chipping away at the forcefield, and Shining Armor is completely in her thrall, unable to reinforce it. Celestia attacks her directly, but even she is overwhelmed by the Queen. Before collapsing she urges the Mane Six to get the Elements of Harmony. They race off, but the Changelings finally shatter the forcefield and crashland into Canterlot. The Mane Six try to fight their way through, but the Changelings take their shape, and a rather confusing melee ensues.

Back at the chapel, Celestia is imprisoned in a Chrysallis and Cadence has been stuck to the floor with some kind of goo. Cadence is convinced that the Mane Six will soon be back with the Elements of Harmony, but she's only half right. The ponies are herded in empty-hoofed, and the Changeling Queen reprises her song as she watches the destruction that her minions are wrecking. Twilight takes advantage of her distraction to free Cadence and tells her to go to Shining Armor. She does and her love for him frees him from his trance. Twilight tells her brother to cast his spell again, but the Changeling Queen says it's too late since they're already in the city. He tries, but he's too weak until Cadence adds her love to sustain him. The two of them are transformed in a manner similar to the Mane Six when they use the Elements, and the resulting spell casts the Changelings out of Canterlot. Twilight runs to Celestia, who tells her that she's fine and that they have a real wedding to put together.

When the big day arrives, Twilight asks her brother how he got someone as great as Cadence to marry him. He tells her that he convinced her that she's not only gaining a husband, but also a sister. Princess Celestia provides the lesson, telling Twilight that she persisted in the face of doubt and that learning to trust your instincts is a valuable lesson. 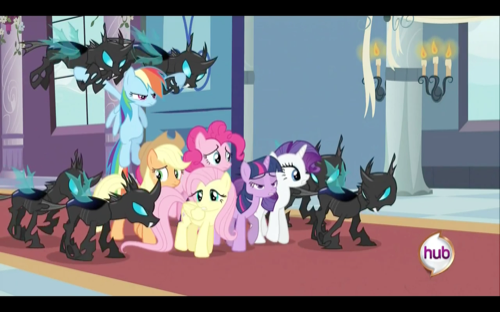 Review: OK, I hate that Cadence/Cadenza is an alicorn. It messes with the show's mythos, and smacks of Hasbro's meddling. I was hoping the writers would subvert her authenticity, but once we got Twilight's flashback it became apparent that wasn't going to happen.

Aside from that peeve, I enjoyed these episodes. I wish they had set up Shining Armor previously, but once he was introduced I quite liked him and the older sibling dynamic he brought. Cadence was eye-roll inducing in Twi's flashback, but was much better when we met her in the flesh. Of course, the Changeling version was a lot of bitchy fun, too.

The Changelings are great villains. Their character design—especially the swiss-cheese legs—is impressive, and pretty horrific. The battle with the Mane Six was the most epic conflict we've seen, and I love that the evil horde was triumphant, if temporarily. (I was expecting Luna to give the ponies an assist, but on rewatch she appears to arrive at dusk from the moon, which is... odd.) Even Celestia got smacked down by the Changeling Queen. While the possibility was implied by her sister's ancient fall, this is the first time we've seen her stumble.

The final triumph of Shining Armor and Cadence was a bit cliched, but it flowed naturally from the story. I did appreciate them playing with the imprisoned princess conceit to a degree, by having her escape to rescue him. And then they played with the inversion to have him ultimately save everybody.

There were a lot of nice character touches going on here: Cadence disposing of the possesed Bridesmaids by tossing a bouquet into a cave (and Rarity bowling over the other guests to secure her own;) Pinkie putting the "canon" back into her Party Canon; AJ covertly donning her hat during the wedding. I'm sure I missed a bunch, having only rewatched it twice.

The musicians were on the ball again, too. William Anderson did a great job with the background music, but Daniel Ingram stole the show with the multiple musical numbers. I particularly liked the counterpoint duet with both Cadences. Apparently, he even worked in some jokes that only music nerds will get.

Tori Spelling's interstitial "reports" were less extensive, and thankfully less annoying, than I thought they'd be. It appears that they weren't filmed at last week's party after all.

Overall, I still prefer the previous season's finale. One reason is because I liked that the subversion was permanent. However, I'm glad that they didn't just do that again and instead tried a somewhat more 'straight' story. The other reason is that last season's Grand Galloping Gala was actually a thing that was built up to. There were two episodes that revolved around preparing for the Gala before we ever saw it. They didn't need to do the same thing—again, I'm glad they didn't—but they could have anticipated it somehow, perhaps by introducing Shining Armor earlier. That would have made it feel more like a finale, and less like a simple two-part episode.

Brony Notes: Derpy was in the audience at the royal wedding. She was in several shots, but in only one are her eyes derped.

Speaking of eyes, DJ PON-3 reappears at the reception and we actually get a glimpse under her glasses! The color of her eyes has been debated by fans for about a year now, and it appears that the majority consensus, red, is now canon. (They actually appear maroon, but that's due to a nighttime color palette.)

Last time I mentioned Storyboard Artist "Sibsy." This week's show included a cameo of her in pony form as one of the couple arguing in Twilight's flashback.

Fan reaction was very positive. Lots of fans were annoyed by Tori Spelling, but the only real complaint I've seen is that the ending felt rushed. There was a lot of speculation that Twilight & Co. got the presentation job precisely so that they'd be on hand to weild the Elements if the threat to Canterlot materialized. One wag suggested that the Changelings were an explanation for the duplicate background ponies we've been seeing throughout the series.

Many images and clips were released ahead of time, so the artists had a head start on this one, but the changelings were a surprise. Unsurprisingly, they were very popular. Pixiv artist スカポン太 did the stylized version of the Changeling Queen above.

Musicians are obviously excited about this one as well, and they've been cranking out remixes in record time. My favorite so far, though, is this simple cover of Twilight's "BBBFF" song. It's by YouTuber CyrilRufus, who's about to move away from home, and his younger sister.

The season's over, and it's about five months to the next one. I've never reviewed the original season, though, so I'll still be here in the meantime. See you next week!