Mr. and Mrs. Cakes have a huge catering job and they need someone responsible to babysit their newborns. Unfortunately, all they can find is Pinkie Pie. 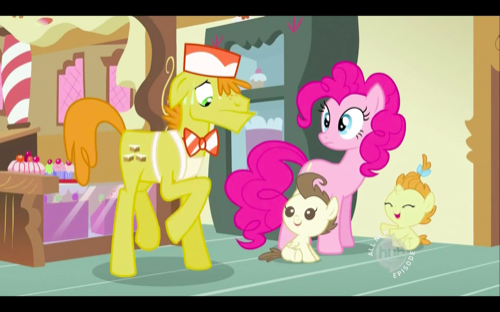 Recap: The Mane Six are in the visiting are at the local hospital. Mrs. Cake gave birth and it turns out that she had twins, Pound and Pumpkin Cake. To everyone's surprise the (earth pony) Cakes now have a little unicorn and pegasus, which Mr. Cake attributes to distant ancestors. Rainbow Dash is eager for Pound's wings to come in and Rarity cautions Mr. Cake about the magic surges in young unicorns. Pinkie wants to celebrate their actual birthday right away, but is thwarted by the nurse on duty.

A month later, Pinkie gets to play with the infants and celebrates with a song about their "Monthaversery." The Cakes remember that they have an important catering order that day, and they need to find a babysitter. Pinky volunteers, but they ask all the rest of the Mane Six (who mostly have previous engagements) before resigning themselves to choosing Pinkie. Mrs. Cake leaves a lengthy list of responsibilities but Pinkie is undaunted.

After they leave, the twins have a crying jag. Pinkie tries everything to get them to stop, but they only do when she accidentally knocks a bag of four over herself. She has similar problems feeding, bathing, and changing them, usually resorting to the flour gag in the end.

Twilight comes by and offers to help, having wrapped up her report. Pinkie is initially grateful, but when Twilight starts talking about how not everypony is up to the responsibility of looking after small children she gets offended and shows Twilight the door. She admits to herself, though, that she hasn't been very responsible and resolves to be more serious. She puts the twins in their bed and orders them to go to sleep. After a stunned moment, they appear to do so. However, in the time it takes Pinkie to turn and close the door, they disappear.

Pinkie quickly finds Pumpkin in a closet gnawing on a rubber chicken but Pound is more elusive. She searches for him through the house and finally finds him 'walking' on the ceiling. It turns out he can fly. Worse, he can fly well enough to drag Pinkie along after him. She manages to retrieve him only to find Pumpkin levitating first her toys, and later herself. She temporarily corals them under an inverted playpen, but Pumpkin can phase through it and Pound can lift it. Pinkie breaks down and cries, and the twins take pity on her, repeating her flour gag for her.

After the Cakes return they're surprised to find the twins napping peacefully. Mr. Cake asks Pinkie if she'd like to be their go-to babysitter. Pinkie initially refuses, but after the twins say her name in their sleep she decides she has time after all. 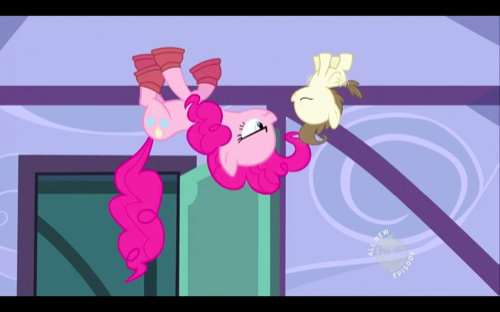 Review: All in all a pretty solid episode. It had the drawback of having a premise that's been done to death, but they did a decent job with it. I know they were going for the Rule of Funny with the precocious infants of questionable lineage, but they had the sense to lampshade it early on.

Obviously they like pop culture references over at Studio B—they had the Big Lebowski cast ponified a few episodes back—but I was not expecting a Trainspotting call out. Interesting that in both of Pinkie's two starring episodes the show gets pretty dark, although much briefer this time than in Feeling Pinkie Keen.

They also managed to round out Twilight a bit in her brief time on screen. Her somewhat tactless observation about responsibility both propelled the plot and gave her character a believable flaw.

It's also interesting the order that the Cakes asked the other cast members. First nurturing Fluttershy, then super-responsible Twilight and Applejack, then the somewhat lazy Dash, and finally "no no no no no" Rarity. The last is a bit curious, since she is one of the two cast members who actually looks after her younger sister on occasion, but it felt about right.

Finally, I'll note that we again didn't get a letter to the Princess, and this time we didn't get a line that might as well have been one. I approve, but it's interesting to see how they're evolving away from that. Update: As noted by Redditor Blaccuweather, Pinkie actually did dictate her message to Celestia, but it was earlier than usual. It's still worth noting, because minor plot points happen after the moral, which is new. 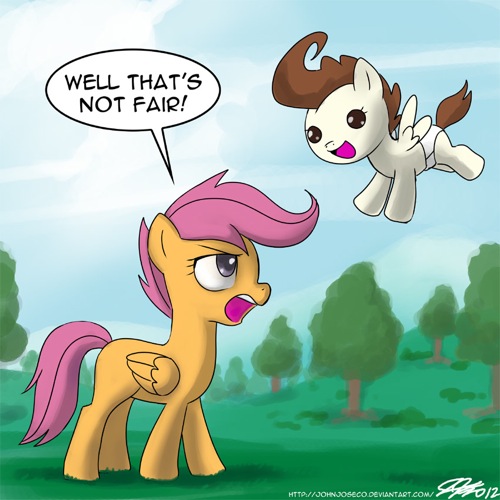 Brony Notes: No Derpy again! Well, technically she's in the opening every episode, but we were promised a "Where's Waldo" game with her and it looks like they stopped playing.

Fan reaction was generally positive, although few are dubbing it a favorite. Pinkie's songs were very brief, as is usual, but the remixes started appearing shortly after the show aired. More impressively, the below video by YouTuber nomorethan9 showed up only hours after the show aired (they likely were going by the Hub's preview description.)

There was a lot of excitement about having pony genetics confirmed as canon. Previously we've only seen ponies with like offspring and siblings. This partially justifies some fanon pairings, such as Derpy being the mother of the similarly colored young unicorn nicknamed Dinky.

There was considerable discussion of pegasus wings, since Scootaloo can't fly while the baby Pound Cake could haul Pinkie around (see the above image by deviantArtist John Joeseco.) The consensus appears to be that pegasi lose that ability for a while until their wings catch up to their body in growth.

One tidbit picked up by the fans was that Pinkie's flour gag made her resemble the original idea for her character (a white pegasus named "Surprise.")